Water Harvesting Strategies: Rain - Ocean - Air As the world population grows and more waters become polluted it is obvious that we need to use this precious resource wisely Currently, less than 1% of the world’s water is potable which is mostly concentrated in the poles. Ground waters are being depleted by the lack of sustainable extraction. (For more information on water pollution please click here).

Methods need to be implemented to reduce consumption and contamination of this most precious resource and provide availability for the global population. In the future, three methods will need to be more frequently implemented to secure sufficient potable and safe water to the global population such as coastal desalination plants, rain catchment systems and as a last resort water extraction from air or dew. The technologies and procedures already exist to remedy the challenge our world faces. 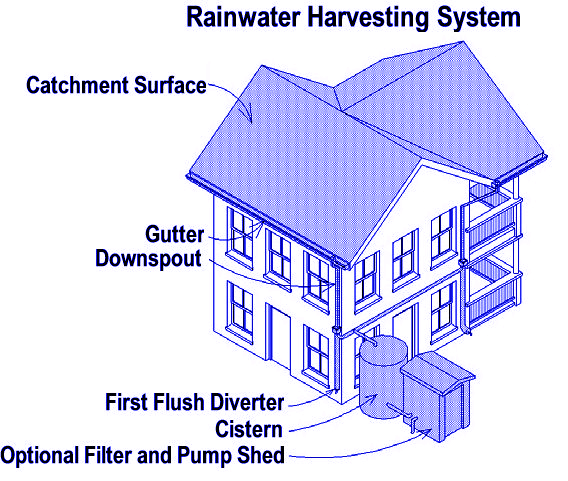 which is very simple to integrate into a household or a community as it can be accomplished by simple methods, requiring a catchment area and a collection chamber. The catchment area size is dependent on the average annual rainfall and the quantity of water that is required. The storage chamber is sized based on usage and intervals of rain. All of this can be simply calculated to size the system requirements. A first flush diverter is installed to separate the rain that initially falls which carries most dust and dirt which is sized based on the catchment area. Depending on the usage of the water additional features are added. To prevent algae and bacteria from growing, a safe and chemical free method is to dispense copper and silver ions into the storage tank by an ionizer. An alternative disinfection method is to dispense ozone in the water that evaporates as oxygen and leaves no trace. Further treatment is required to produce high quality potable water (See Holistic Purification of Water).

Desalination is typically energy intensive as it uses 10 times more energy to produce potable water than conventional methods. Hence it is a costly procedure to harvest potable water from the ocean or salty water sheds. Two methods are commonly applied in large scale desalination facilities vacuum distillation and reverse osmosis. A low cost alternative is radiant solar desalination. Our former project in Zimbabwe has demonstrated the feasibility of this desalination method. The disadvantages are that larger areas are required for the catchment of water and may not be feasible for large scale desalination. However, the increasing demand for water and the cost benefit alongside the improvement of desalination efficiency will make this method more feasible and necessary.

Capturing water from the air may need to be more frequently adapted where no other access to clean water is available. There are many different methods to catch water from air.

The devices also known as air wells mostly apply the principle that cooler surfaces or reduced air pressure allows moisture to condensate when the surface is below the dew point. Many inventions have been made that utilize this principle in a passive and active way. Arid desert climates seem particularly suitable to capture water from air as the diurnal temperature difference favor dew formation. The simplest method we have come across is a big pile of rocks on an impermeable layer that collects the water. Another method to build an air well is to create a chamber lined with stones with channels directed to the wind and a vent that is heated by the sun. The convection draws the warm moist air in to the cool chamber that allows for condensation. This has been demonstrated in arid climates with less than 6% humidity. Another simple method to capture water from air moisture is called a dew pond which is made by excavating a concave circle far in excess of the size of the proposed pond. Then a cover of straw 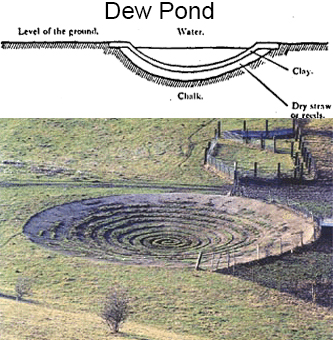 is placed on the excavated space. The straw in turn is covered by a layer of well-chosen, finely puddled clay, and the upper the surface of the clay is covered with stones. Care has to be taken that the margin of the straw is effectively protected by clay. The pond will eventually become filled with water even without rain fall. During the warmth of a summer day the earth will have stored a considerable amount of heat, while the pond, protected from this heat by the non-conductivity of the straw, is at the same time chilled by the process of evaporation from the puddled clay. The consequence is that during the night the warm air condenses on the surface of the cold clay. As the condensation during the night is in excess of the evaporation during the day, the pond becomes gradually filled with water. Other active energy dependent methods work with a cooling conduit that facilitates condensation. Several machines exist that accelerate the air catchment process by taking advantage of the same principles to condensate water from air moisture.

There is no technical challenge that prevents us from providing safe drinking water for every human being on this planet. The solutions to provide clean water for all exist it is just a question of our willingness to drive forward the solutions that are beneficial rather than employing short term solutions that are not sustainable and damage our health and environment.